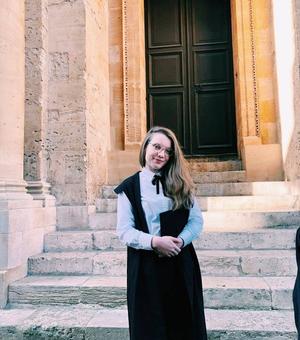 Thesis Title: Beyond the Mainpiece: The Mediation of Female Performance in the Ephemera of the Brady Collection

My project makes use of the yet uncatalogued Brady Collection held at Christ Church Library. This collection of ephemera, alongside a large reference library of associated books, came to the library in 1977. Containing tens of thousands of items ranging in date from the 17th to 20th centuries, the collection spans a range of theatrical and entertainment subjects and is an invaluable primary resource. It includes c. 15,000 theatrical portraits of authors, actors and actresses (both in and out of roles), characters, dramatists, and depictions of theatrical productions, along with the music and other related materials.

My thesis will explore the mediation of performances by women in eighteenth-century theatrical ephemera, expanding our understanding of how theatrical ephemera was understood and interacted with by both performers and the theatrical public. My project considers ephemera in various stages of mediation, including embodied performance (such as the use of playbills as props), print production, and post-performance compliation and collection. I am employing a highly multi-disciplinary approach which combines performance studies, literary studies, art history, media studies, and cultural history.

My other research interests include short afterpiece drama, classical adaptation, and the relationship between the theatre and visual culture. I am also currently serving as Postgraduate Representative for the British Society of Eighteenth Century Studies.